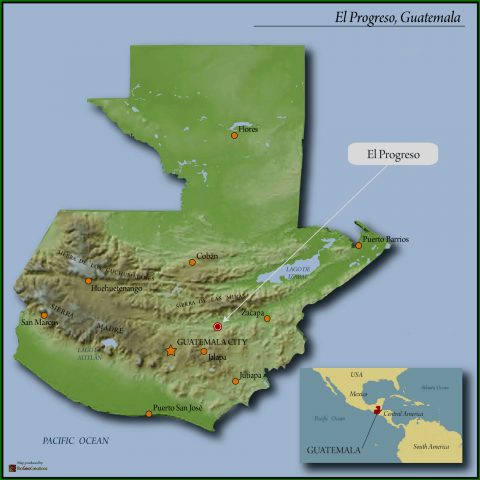 Want to go in a different direction? When looking for a source of Guatemalan coffee, most go to western Guatemala. But Jose Higinio Gómez and his wife Aura Libia de Jesús Gómez Garcia went east to the Sierra de las Minas, not far from the border of Honduras, and established their first coffee farm in 1988 with about an acre of land in a place called Las Moritas. Today, Jose and Aura harvest coffee from more than 150 acres in Las Moritas, a community that has grown from a place with just a few potato farms to a thriving coffee community where hundreds of families have settled to work and open businesses. This lot comes from a 40-acre farm called El Durazno, which sits at a stunning 1800 MASL with coffee rows carved into terraces along the contours of the steep terrain. Cherries from El Durazno are taken to La Esperanza, a mill with its own storied history of receiving and processing cherry. Fermentation tanks at La Esperanza, located in an enclosed building, are often heated with the same forced air used to heat the mechanical dryers to maintain a relatively consistent 36-hour fermentation protocol despite sporadically cold conditions in Antigua. Coffee is washed mechanically after fermentation and then pumped to a silo to remove water and pre-dry. The mill is equipped with mechanical dryers (guardiolas) and patios. Water is well managed and properly treated. Dried parchment is taken to San Isabel, a dry mill in Guatemala City. San Isabel is equipped with multiple pieces of equipment to sort green coffee typical in most dry mills, such as, gravity beds, screens and electronic eyes. The mill also has a piece of equipment called a catadora, which is placed immediately after the dehuller and operates like a wind channel to remove broken and less dense coffee beans. Mild weather in Guatemala City provides ideal conditions for storing parchment in the warehouse until it is time to export